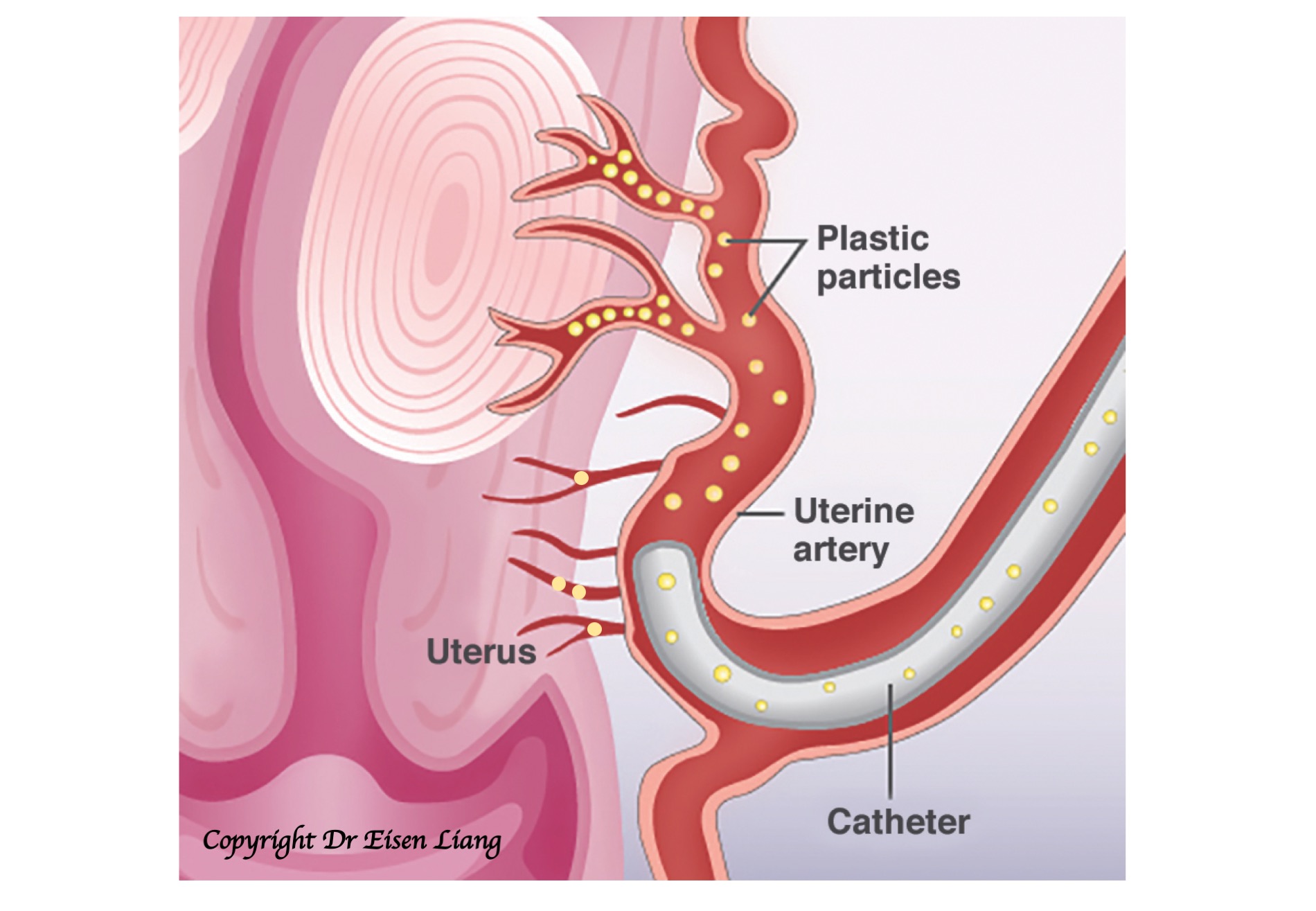 Many Australian women suffers from fibroids – a benign growth in the uterus (womb), with symptoms such as heavy menstrual bleeding, period pain, bladder and pressure in the pelvis.
In the past, women were told to put up with it, wait for menopause, or have a hysterectomy.
But not anymore. There is now effective alternative to hysterectomy.
Over the past 20 years, studies have shown that a non-surgical procedure called UFE can be as effective as a hysterectomy to alleviate fibroid symptoms.
UFE can be performed using local anaesthetic, without no surgical incisions, only one night in hospital and one-week recovery.  Read on to find out how UFE can help women avoiding hysterectomy. 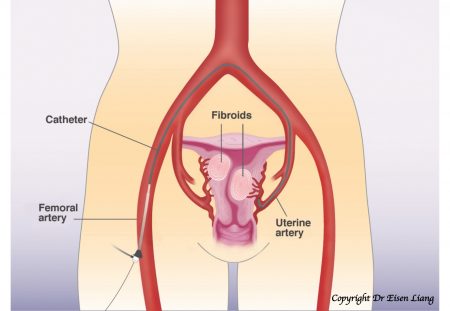 What is UFE?
UFE (Uterine Fibroid Embolisation), also known as UAE (Uterine Artery Embolisation), is a radiological procedure that will shrink fibroids. UFE alleviates fibroid symptoms such as heavy menstrual bleeding (HMB), period pain, pelvic pressure and bladder symptoms. Studies has shown that UFE is as effective as hysterectomy, but is much less invasive, and the recovery is much quicker.
Your gynaecologist might not have mentioned UFE, which is performed by an Interventional Radiologist, not gynaecologists. 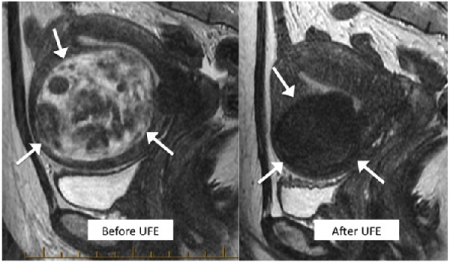 How effective is UFE?

UFE was first reported in 1995. Since then many research studies have the safety and effectiveness of UFE.

There are now 7 randomised control trials (RCTs) comparing UFE with surgery (myomectomy or hysterectomy). These Level 1 evidences was summarised by Cochrane review in 2014. Cochrane is the highest authority when it comes to comparing treatment options. Cochrane stated that UFE has similar outcome compare with surgery, in terms of symptom relief, patient satisfaction and quality of life improvement. In other words, UFE is as effective as hysterectomy, but less invasive and with quicker recovery.

How is UFE done?

UFE is performed under local anaesthetic and sedation. A small 1-2mm tube called catheter is inserted into the femoral artery in the groin. Using modern X-ray equipment, the catheter is then navigated to the arteries to the uterus. Small plastic particles (usually PVA polyvinyl alcohol) the size of sands are mixed with X-ray dye and injected to shut down the blood supply so that the fibroids will shrink and die. Patients stay overnight in hospital and may resume normal activities in one week.

Watch this video: How does UFE work?

How does UFE shrink fibroids without harming the normal uterus?

The uterus is a very special organ in human body. During pregnancy, the uterus enlarges tremendously, carrying with it 40 times increase in blood flow. The uterus has an immense capacity to re-open and recruit dormant blood vessels when needed, like during pregnancy. Once the baby is born, the uterus shrivels down and most of the blood vessels also shut down and closed. Unlike normal uterine muscle, fibroids vessels stay open do not have the ability to reopen or recruit new blood vessels. Particles blocking the fibroid arteries will lead to fibroid death and shrinkage. Some particles may enter normal uterine muscle tissue, causing transient lack of oxygen, but dormant vessels are then recruited to keep normal uterus alive. As a result, the fibroids die, and normal uterus remains alive.

Does size and number matter for UFE?

No. UFE treats all fibroids, large or small, one or multiple, are by the same procedure-blocking of the left and right uterine arteries by using small particles. Therefore, the number of fibroids does not matter.

Size does not matter in general. On average, fibroid will shrink 60% of its volume. This amount of shrinkage is sufficient for symptom control in more than 90% of patients.

How soon do we see the effect of UFE?

For heavy periods, quite often the menstrual loss is noticeably reduced at the first menstrual period after UFE. Pressure and bladder symptoms might take 2-3 months to be noticeably relieved.

Is pregnancy possible after UFE?

Many research studies suggest pregnancy is possible after UFE. There seems to be no foetal growth retardation. However, when compared with a general obstetric population, the rate of miscarriage, pre-term delivery and post-partum haemorrhage is higher in women who have undergone UFE.  This is probably related to the fibroid disease itself rather than the UFE procedure.

Dr Eisen Liang is an Interventional Radiologist who founded Sydney Fibroid Clinic. He has worked collaboratively with gynaecologists for more than 10 years in helping women to resolve fibroid related symptoms. He has published articles in Australian Doctor, Medical Republics and ANZJOG.