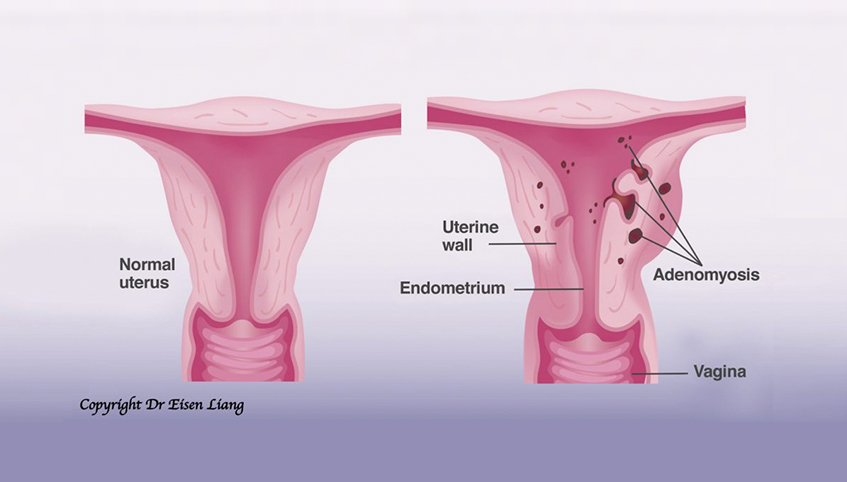 Adenomyosis (pronounced as aden-no my-osis) is the BAD cousin of endometriosis. It is an under-recognised cause for heavy menstrual bleeding and severe period pain.

Read on to learn more about adenomyosis and find out how UAE relieve heavy painful periods without hysterectomy.

Adenomyosis is endometriosis within the uterus.

It can cause debilitating heavy menstrual bleeding and period pain. It can also impair fertility and pregnancy.

Adenomyosis is often missed by ultrasound; MRI is more accurate.

Heightened awareness and suspicion are crucial to early diagnosis.

Hysterectomy is no longer the only solution.

Adenomyosis can be found in up to 70% of hysterectomy specimens, and therefore may be far more common than appreciated clinically.

What are the causes of adenomyosis?

We don’t really completely understand what causes adenomyosis. However, there is the suggestion that previous uterine trauma of any kind can leads to development of adenomyosis. The risk factors are multiple pregnancies, termination of pregnancy, uterine curettage and caesarean section.

Adenomyosis is an oestrogen dependent condition and therefore women’s age, early on-set of menstruation, short menstrual cycles, obesity and Tamoxifen use are also risk factors. There is also association between adenomyosis, depression and use of antidepressant medications.

How is adenomyosis diagnosed?

Awareness and clinical suspicion are the keys to reaching an early diagnosis. Women with adenomyosis typically complain of HMB and severe period pain. The uterus can be enlarged and tender. Ultrasound operators may need to be alerted and prompted to look for the subtle signs of adenomyosis. MRI is more accurate than ultrasound in clinical practice. 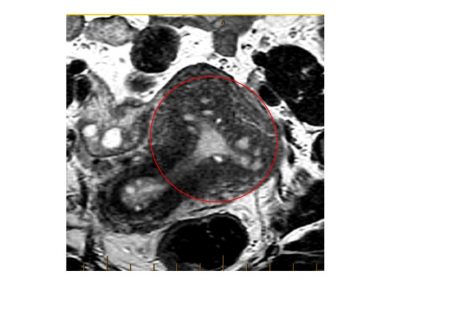 How good is Mirena for adenomyosis? 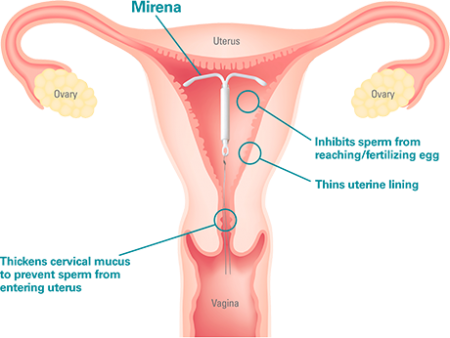 Mirena slowly releases tiny does of progestrogen over 5 years.

A study from China showed Mirena is also effective in reducing period pain. However, patient satisfaction rate was only 56.3% at 12 months. Common side effects such as prolonged light bleeding (25%) or irregular bleeding (14%), and other less common side effects such as weight gain, ovarian cyst formation, lower abdominal pain and acne contributed to the less than ideal satisfaction rate. Some women also report mood changes with Mirena.

What is UAE? How does UAE work?

Uterine Artery Embolisation (UAE) is an interventional radiology procedure. It is non-surgical and non-hormonal. UAE is performed under local anaesthetic and light sedation. It requires usually only a 1-night hospital stay and 1-week recovery. 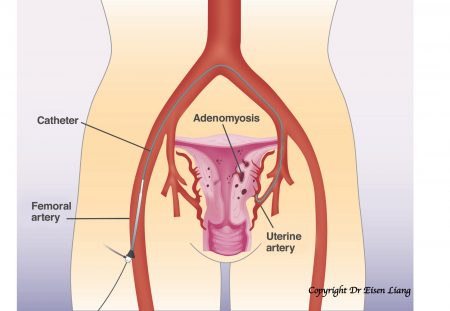 During UAE, a small catheter is navigated to the artery of the uterus.

During UAE, a small tube (called catheter) is navigated under X-ray guidance to find the uterine arteries. Small particles suspended in X-ray dye are injected into the uterine arteries to block the blood supply. The adenomyotic tissue will die due to the lack of oxygen. Normal uterine muscle wall has many dormant arteries that can be recruited and therefore isn’t harmed. 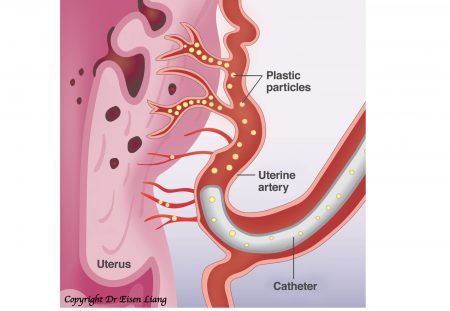 Particles are injected to block the artery of the uterus.

Watch the video: “How does UAE work for adenomyosis”

How safe and effective is UAE?

UAE is the probably the most effective uterine-preserving treatment. Sydney Fibroid Clinic’s own patient satisfaction rate is 90% – meaning 90% of women treated were happy or very happy with the outcome of their UAE in relieving heavy menstrual bleeding and period pain.  There were no major complications. 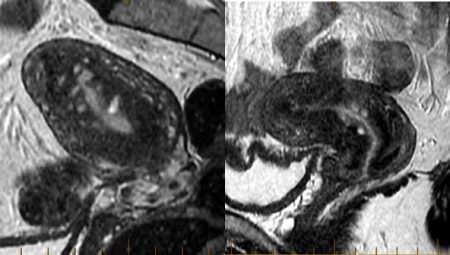 46-year-old hair saloon manager has been suffering from HMB and severe period pain for 10 year. She failed Mirena due to prolonged bleeding and spotting. MRI showed diffuse adenomyosis with large cyst-like bright foci representing glands in the muscle layer that disappeared after UAE. She had a successful clinical outcome with resolution of her HMB and pain. She said her UAE was “liberating”.

Watch video: Elizabeth’s Life-Changing Story about her Adenomyosis and UAE

Is Ablation the right treatment for Adenomyosis?

Endometrial Ablation uses heat energy to destroy the inner lining of the uterus.

Endometrial ablation uses heat energy to destroy the inner lining of the uterus, so bleeding will be reduced.

However, glands in the muscle (adeno= glands; myosis in the muscle) will be trapped. Some have described this as “sealing off the juice on the BBQ hot plate”. Period pain and prementrual bloating can get worse following ablation. Even with modern technology, adenomyosis deeper than 2.5mm cannot be treated by ablation, according to a 2015 study.

If MRI is used for diagnosis, the minimal depth is 12mm . Therefore, adenomyosis diagnosed on MRI should not be treated with ablation.

In the past, when ablation failed to treat adenomyosis or if pain is worse after ablation, hysterectomy is to follow.

Today, there is an alternative to a hysterectomy.

If you had ablation and the pain has become worse, UAE might help to kill off adenomyosis tissue and alleviate pain.

Can adenomyosis be surgically removed?

Generally speaking, adenomyosis is not suitable for surgical removal. Adenomyosis is often a diffuse infiltrative process. Unlike fibroids, which can be easily separated from the normal uterine wall, adenomyotic tissue does not have a clear boundary with the normal myometrium. 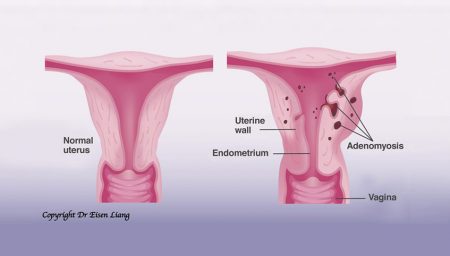 There is no clear boundary between adenomyosis and normal uterine wall and therefore cannot be effectively removed.

Surgeons often find it difficult to determine where adenomyosis stops and where normal myometrium starts. The removal is either incomplete, leaving behind adenomyotic tissue which can continue to grow and cause problems, or a larger than necessary amount of normal myometrium around the adenomyosis might have to be removed.

Surgeons might have been misled by an incorrect ultrasound diagnosis and inadvertently went ahead with surgery, with the intention of removing a “fibroid”. Half way through the surgery, it is then realized that the “fibroid” cannot be separated out from uterus and in fact it was adenomyosis that they are dealing with, and that surgery might need to be abandoned.

Is “wait for menopause” a good wisdom today?

Adenomyosis is an oestrogen dependent condition and will become worse during the perimenopause time. Periods remain heavy and painful, and the situation could be worse with added cycle unpredictability. If a woman requires hormone replacement therapy, the oestrogen component might worsen adenomyosis.

Is hysterectomy still “the only solution” in the 21st Century?

In the past, hysterectomy was seen as the only definitive treatment for women suffering from adenomyosis related symptoms. From early 2000, reports have emerged documenting the effectiveness of uterine artery embolisation (UAE) as an effective non-surgical alternative to hysterectomy.

How does adenomyosis affect fertility?

Adenomyosis has a negative impact on fertility and pregnancy. Women with adenomyosis are more likely to have premature delivery or pre-mature rupture of membranes.
Adenomyosis can also have a detrimental effect on IVF outcomes, reducing pregnancy rate and live birth rate.

How is adenomyosis related to endometriosis?

Adenomyosis is under-recognised condition.  It can produce debilitating heavy menstrual bleeding and period pain. UAE is an effective treatment options for women who prefer to avoid hysterectomies.